In April of 1987 I went to Ladakh. As I flew into Leh, I was the only foreigner in sight. The pass from Srinigar in Kashmir to Leh was still closed for the winter. 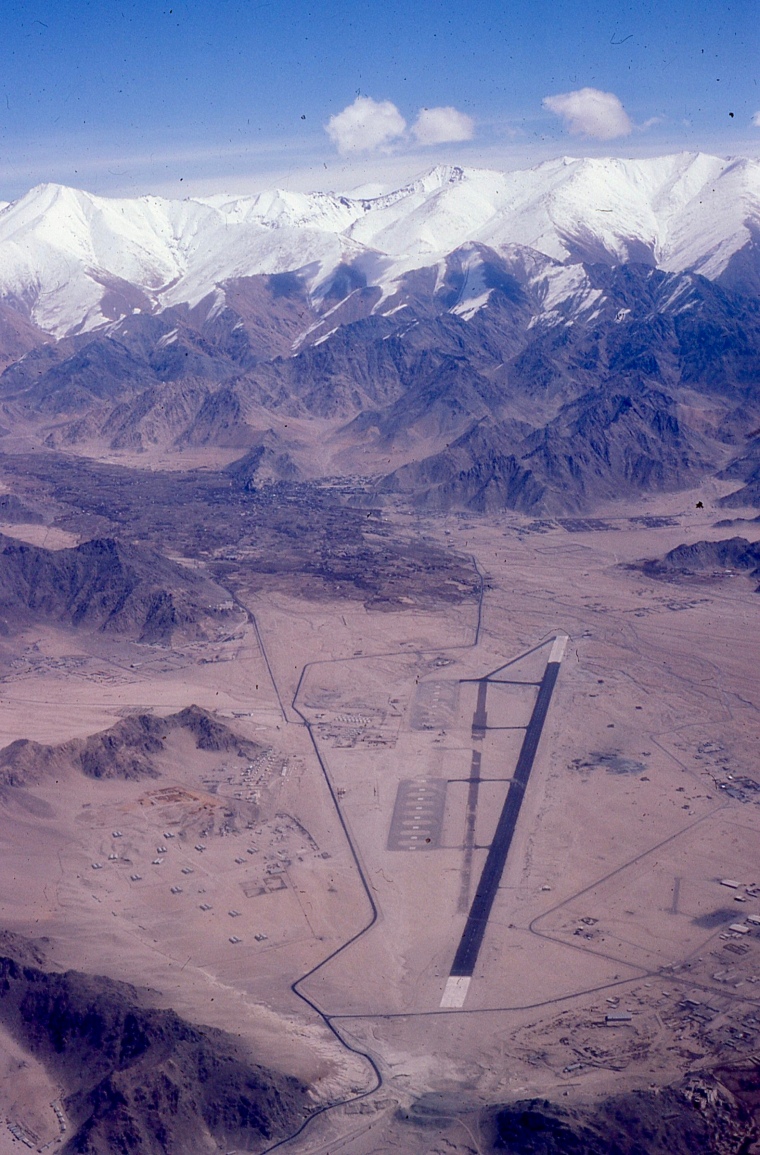 A man named Tashi led me to a place to stay and we became fast friends. He loved that I was Canadian. He had been one of the porters on the 1982 Canadian Expedition and I happened to know some of the climbers on the expedition who lived where I was living at the time – in Banff.

Tashi had walked from Ladakh all the way through Tibet to Lhasa to trade salt with his father. The journey took two years. I had been traveling at this point for seven months, and my journey had begun wandering throughout Central Tibet. His stories filled my heart with longing. 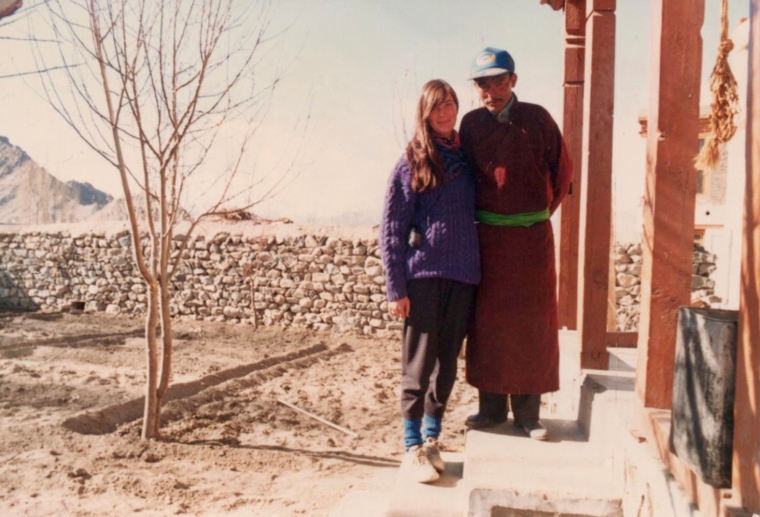 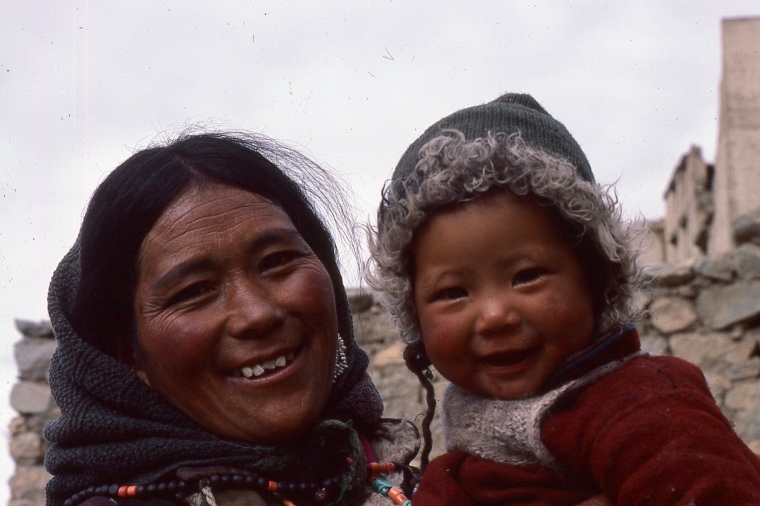 Tashi took me under his wing as there was not much business for him as a guide in the early days of April. He brought me to a funeral in this area below beyond Leh towards Thikse. I remember someone trying to describe how two men fought over a woman and someone was murdered. The wailing and shouting and clanging pots and pans is indelible in my memory.

I have recently been reading a book about the sacred geography of the Himalayas. It is written by Dave Zurick who I met on my first trip to Nepal in 1985. Dave was describing the ancient Sea of Tethys and mentioned how the huge Maitreya Buddha at Thikse Gompa had a beautiful ammonite fossil in it’s third eye.

I thought, I must have a picture of that! Even though I was not aware of this ammonite, despite being obsessed with fossils, the image of it was already in my mind. He says, “Even seashells are found on the icy summits – additional reminders of the fact that the Himalayas arose from the marine environment of the Tethys Sea.” 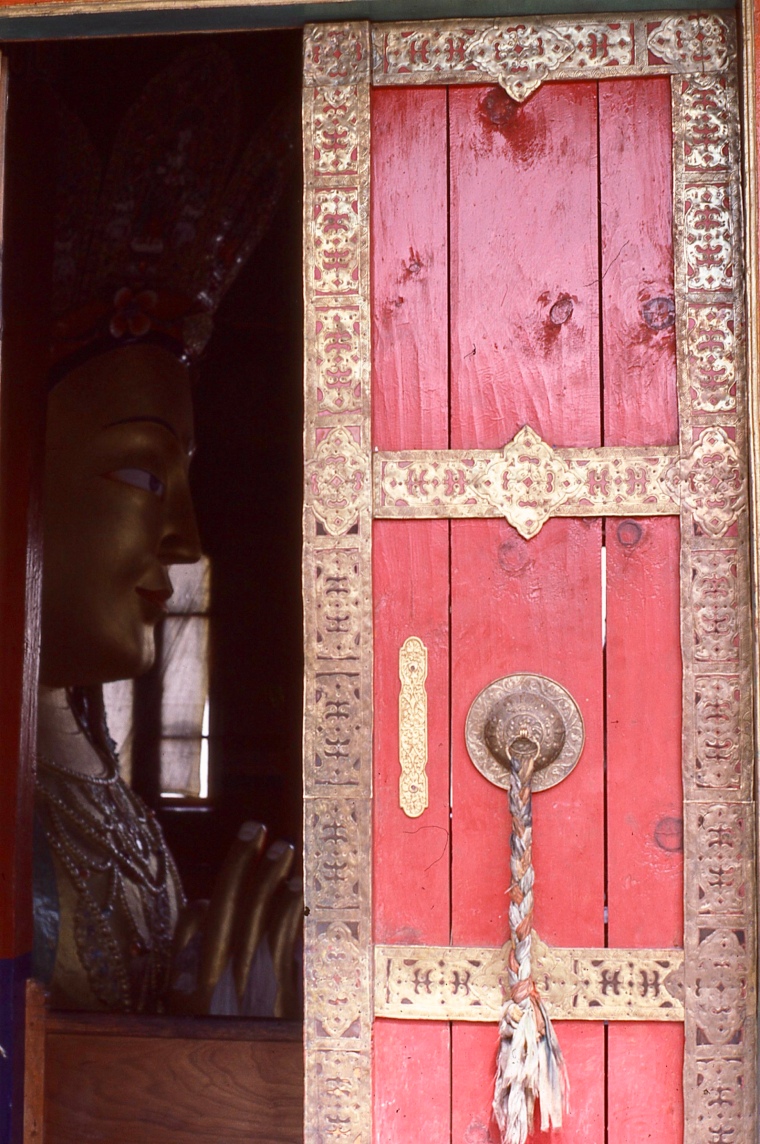 Dave elaborates, “And among the remnants of the Tethys Sea are the treasured ammonites, believed to be sacred mandalas, whose spiral patterns represent the cosmos. So important are the universal qualities ascribed to this maritime relic that it occupies a place of honor as the “Eye of Wisdom” on the broad forehead of a ten meter (thirty-three-foot) tall golden Buddha enshrined in the Thikse Monastery in Ladakh.”

I decided to go on my own far west to the Fotu La Pass and visit as many monasteries as I could find. I first went all the way to Lamayuru Monastery – originally the foremost Bon Monastery in Ladakh – which is 15 km east of the pass on the Srinigar-Leh Highway.

As I left, Tashi was worried for me, as was the family I was staying with. They said, “Don’t get in an army jeep!”. There were presently 200,000 military troops in Ladakh to guard borders towards China and Pakistan, and only 60,000 Ladakhis. Women were going missing.

When I got to Lamayuru, there were no guest houses open. I can’t remember how it happened, but they suggested I sleep in the monastery with the monks – literally in the same bedroom! I can still remember hearing the monks chanting all night long. 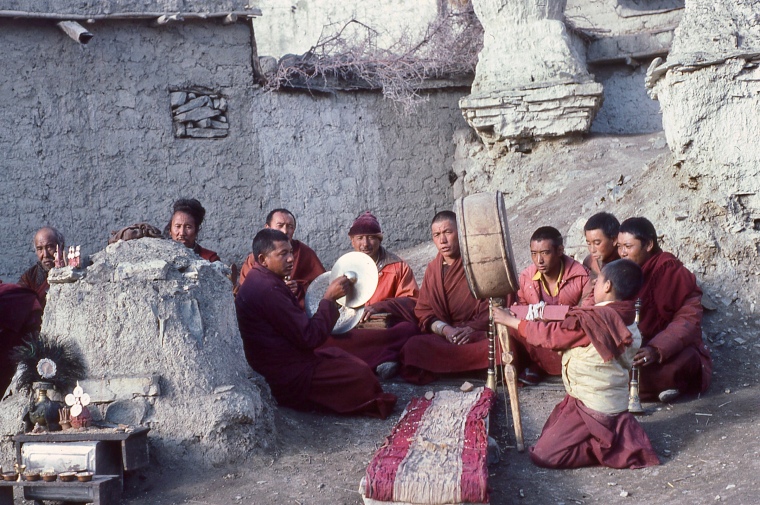 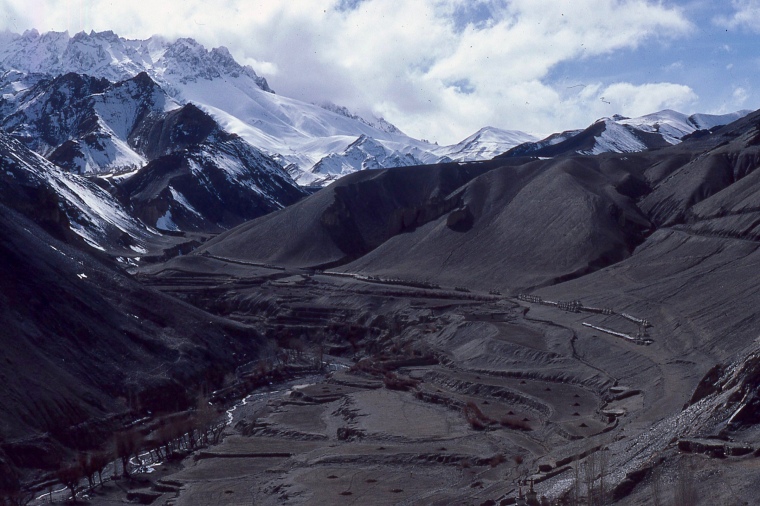 This monk in particular was incredibly helpful and accommodating. After sticking close to home for a couple days, I asked him where I should go for a walk. He gestured to go down into the valley then up, then over to Wanla Gompa. I had no map or guide book, so I just headed out trusting the earth to guide me. 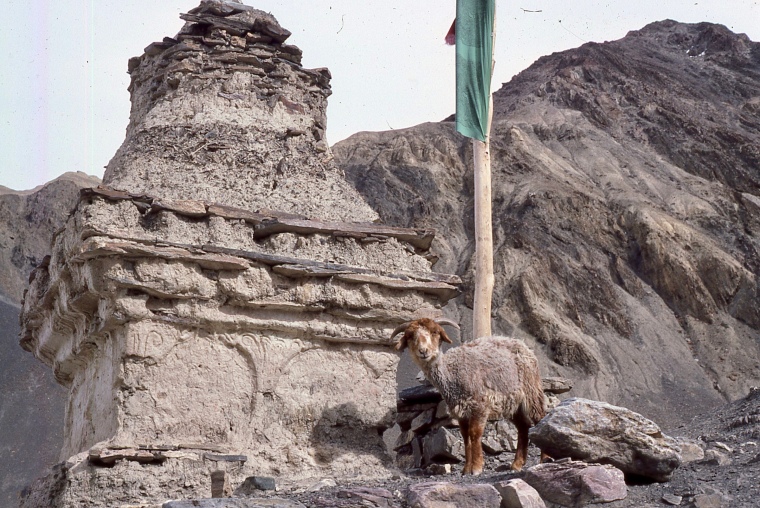 It took forever to get on top of this pass, and I rested a few moments when a postman all the sudden appeared out of nowhere. Through sign language, he assured me all I had to do was go down and then left further down the valley.

I wondered, “How deep down into the valley, must I go?”, as I looked down into this jumbled terrain. My concerns were founded as it was as deep into the gorge as one could go.

And once I got to the bottom of that drainage, it was still quite a way further down the valley until Wanla Gompa finally appeared on the top of a hill.

I was exhausted when I got there, and if one can believe it, the gompa was closed that day of the week! I had brought nothing with me – no extra clothes or food. I hung out in the village surrounding the gompa for a couple hours and then walked all the way back home to Lamayuru. I remember shaking my head at my monk friend as I arrived back at dark completely spent.

But I had no worries that day. It was beautiful, and I felt free. Unlike an experience that happened a couple days later when I feared for my life. I had decided to leave Lamayuru and go back east towards Leh visiting other monasteries. My next destination was Rizong Gompa. 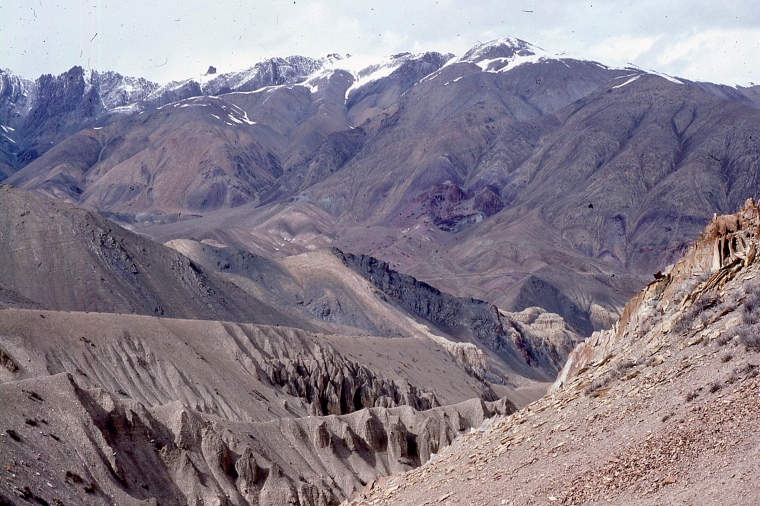 I got up in the wee hours to hang out at the side of the road to wait for a ride. There was no one around. I had seen no other foreigners my whole trip, and very few vehicles were on the road since the pass was closed. I waited and waited. At one point one of the monks came and joined me. He spoke no English, but it felt good to have his company. We waited for hours. Finally a vehicle came. It was an army jeep. I knew the danger, but felt safe as I was with the monk. I piled into the back with the monk and a half dozen soldiers. We drove along.

The monk was talking here and there with the soldiers. I had no idea what they were discussing. All of a sudden we arrived in a town, and as quick as could be, the monk jumped out and said goodbye. I was in shock. He knew I was planning to go further to Rizong, but must have not worried for me. And as soon as we were on our way past the town, everything changed.

The soldiers in the back of the truck sidled up close to me. I was dressed in a Ladakhi coat, the man’s version, trying to look as androgynous as possible. I was sitting next to the back door of the truck with two lengthwise rows of seats at either side and my pack was on the roof. I began chanting mantras, trying to not imagine what could happen to me. It would be useless to just jump out of the back of the truck. There were no other vehicles or people around.

The soldiers started becoming more aggressive, their tone of voice belligerent and degrading. I couldn’t even look at them. I just kept my head down furiously chanting. I don’t know how long this lasted. Of course it felt like an eternity. And in the midst of the taunts and them pressing up against me, I heard other yelling from the front of the truck. Someone – the driver – was yelling at them.

The energy was intense and reached a peak when the truck all of a sudden came to a grinding halt and the driver stepped out and threw my pack on the road and motioned for me to get out, slammed the door and drove off.

I was in the middle of no where. I just laid down on the road and cried. And if that was a narrowly escaped hell, heaven was to come. I walked along the road for sometime until I could see a village in the distance. As I got close all these children started running towards me, grabbed hold of my hands, and brought me home.

The fellow below in the left made me lunch. I remember it too clearly. He had canned tuna! A complete delicacy for me after traveling in Tibet, Nepal, Thailand and India for seven months.

After a good rest in the village a bus came by and dropped me off at the road leading up to Rizong. I walked amidst purple mountains and blue skies feeling soothed and safe and melting with gratitude. 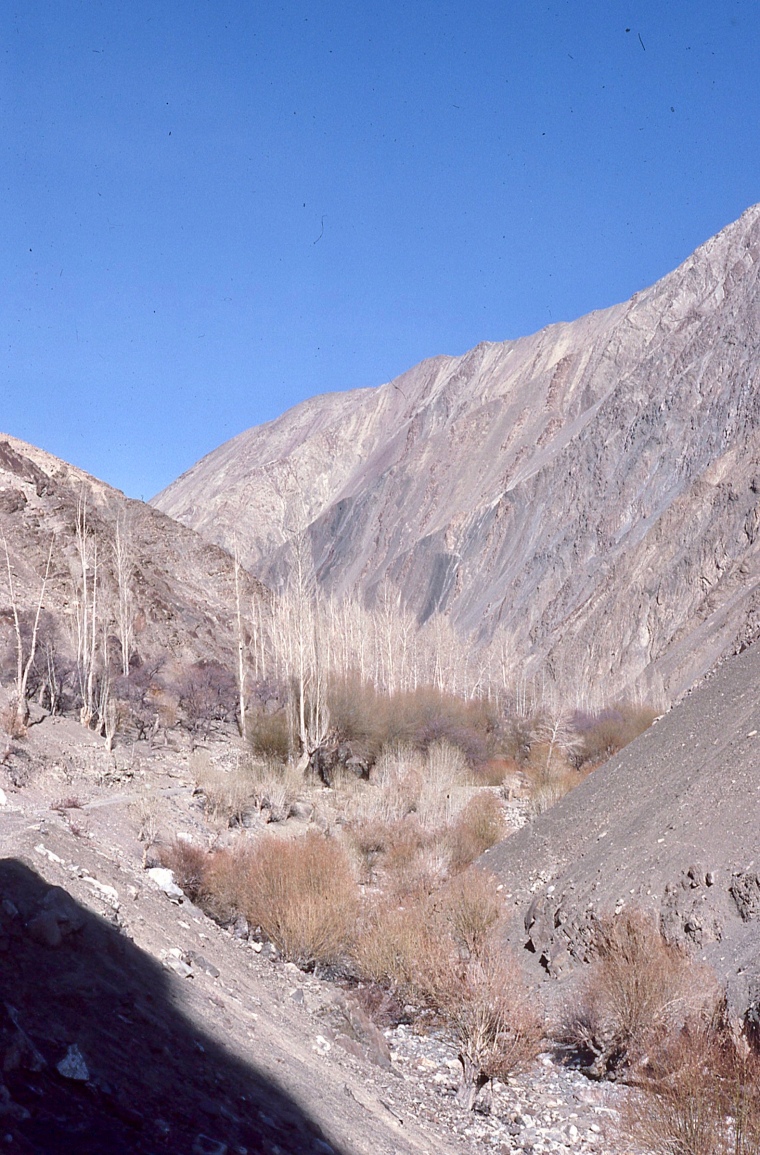 I have mentioned in my post of traveling in Tibet, six months before this, how life was so different back in the 80’s. Not as much to consume. Quieter. Less information. And me trying to merge into the landscape and not be a tourist at all. Barely taking any pictures in slide form with a manual camera. Hiding out in the wilds of nature.

When I was back in Leh, Tashi brought me on a couple day trips. He had a guiding job for some folks from Thailand. I gladly went along after my frightening solo venture. Months later when I was back home in Banff, I received a packet of photos from Thailand. The Thai family had sent me a bunch of photos they took of me – looking like a tourist! They made me laugh.

I worry about the planet and unsustainable tourism. I have heard Ladakh is now over run by tourists since the release of the Bollywood move, “3 Idiots”. Plastic waste litters Leh and a ridge near Khardung La pass, where bikers and SUV’s pass through to Nubra Valley and Pangong Lake – the sights many Indian tourists want to visit because of the movie.

I hope we can change our ways. I end with these photos from my Thai friends to show the land uncluttered and free. I wrote in my diary 33 years ago, “I could sit in this one place for the rest of my life, and be perfectly content, totally at peace, my eyes gazing to the infinity inside and outside, the plateau of life, the freedom of mind and spirit”. 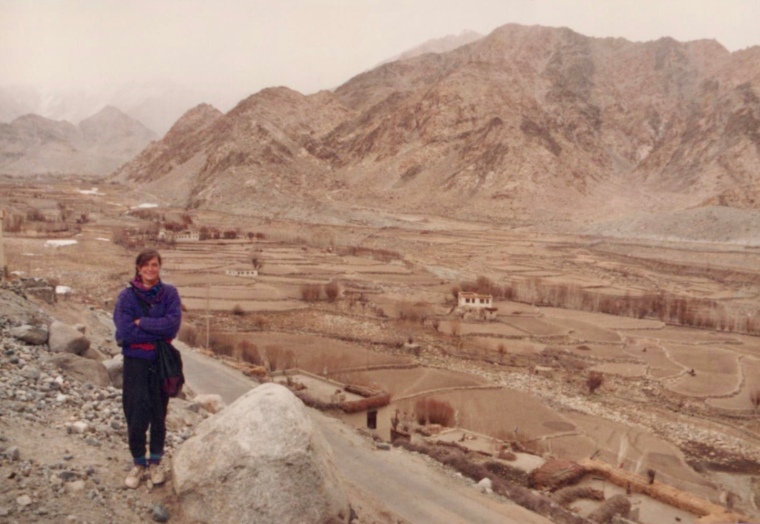